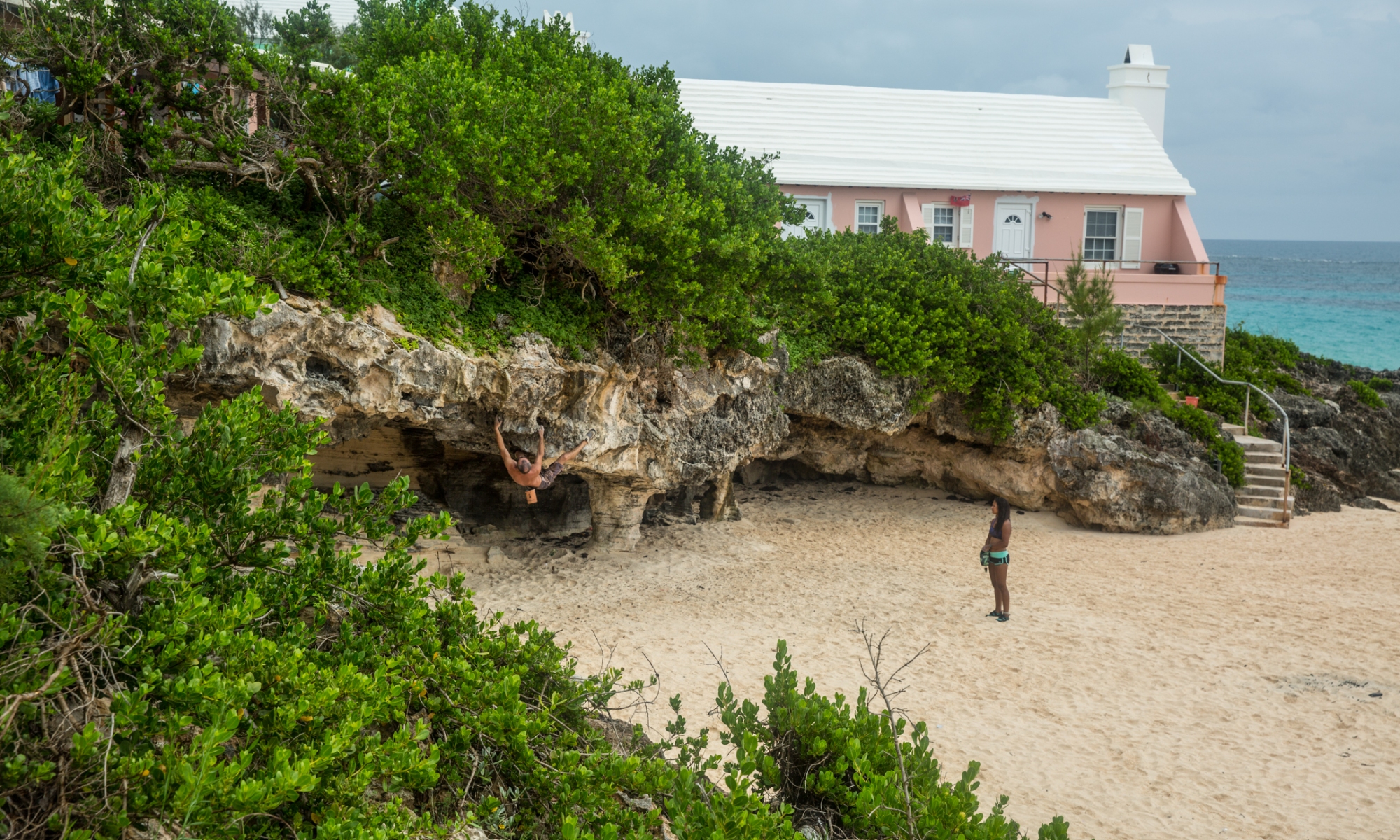 The best beach bouldering to be had in Bermuda is to be found tucked away in the left-hand corner of this tranquil spot. The obvious roof system sweeps above a sandy landing from two pillars on the right hand side. The rock is incredibly sharp so watch your skin. In the summer, the beach may be busy with sunbathers all over the place, including underneath the bouldering. However, for most of the year the beach is deserted.

SAVE YOUR BREATH V2

Start on the left hand pillar. Climb directly out to the lip via a large thread then follow the lip leftwards to the top. Superb. Grant Farquhar 2002.
Time lapse video of Save Your Breath.

Jazmyne Watson on Save Your Breath. Photo Andrew Burr.

A variation on Save Your Breath. From the thread climb leftwards under the roof to finish as for the parent problem. Grant Farquhar 2002.

Start at the right-hand pillar and follow the underside white rock past the second pillar. Climb underneath the roof until the white strip ends and then top out. Jazmyne Watson Feb 2011.

A nice little problem, sand level permitting. Sit down start in the very right hand corner. Climb out to the obvious juggy rail. Climb down leftwards on pockets to finish in a porthole feature at ground level. Difficult to get onto if the sand is high. Grant Farquhar 2002.

A sustained link up. Start as for Rock Fever or from the RHS of the rail. Follow the rail leftwards to a no-hands rest on the first pillar. Continue along the lip on jugs to join Save Your Breath and finish along this. Grant Farquhar 2002.

OF COURSE MY HORSE V6

The line perpendicular to Dark and Stormy. Sit start, climb out jugs, cross the roof, and top out on sharp jugs. The start is the obvious juggy cave, go straight out from there. John Langston & Josh Hill August 2010.

Start on the left side of the left pillar, underneath the roof on a brick shaped hold. Go up the roof on the small crimps then make your way right out to the face. Long move directly up the face to then top-out. Josh Stephenson March 2015.

DARK AND STORMY V9/Font 7b+

The hardest problem in this area courtesy of Mr E12. Takes a line through the roof above Rock Fever from right to left on the honeycomb holds, without using the back or the lip of the roof. Dave MacLeod 2004.