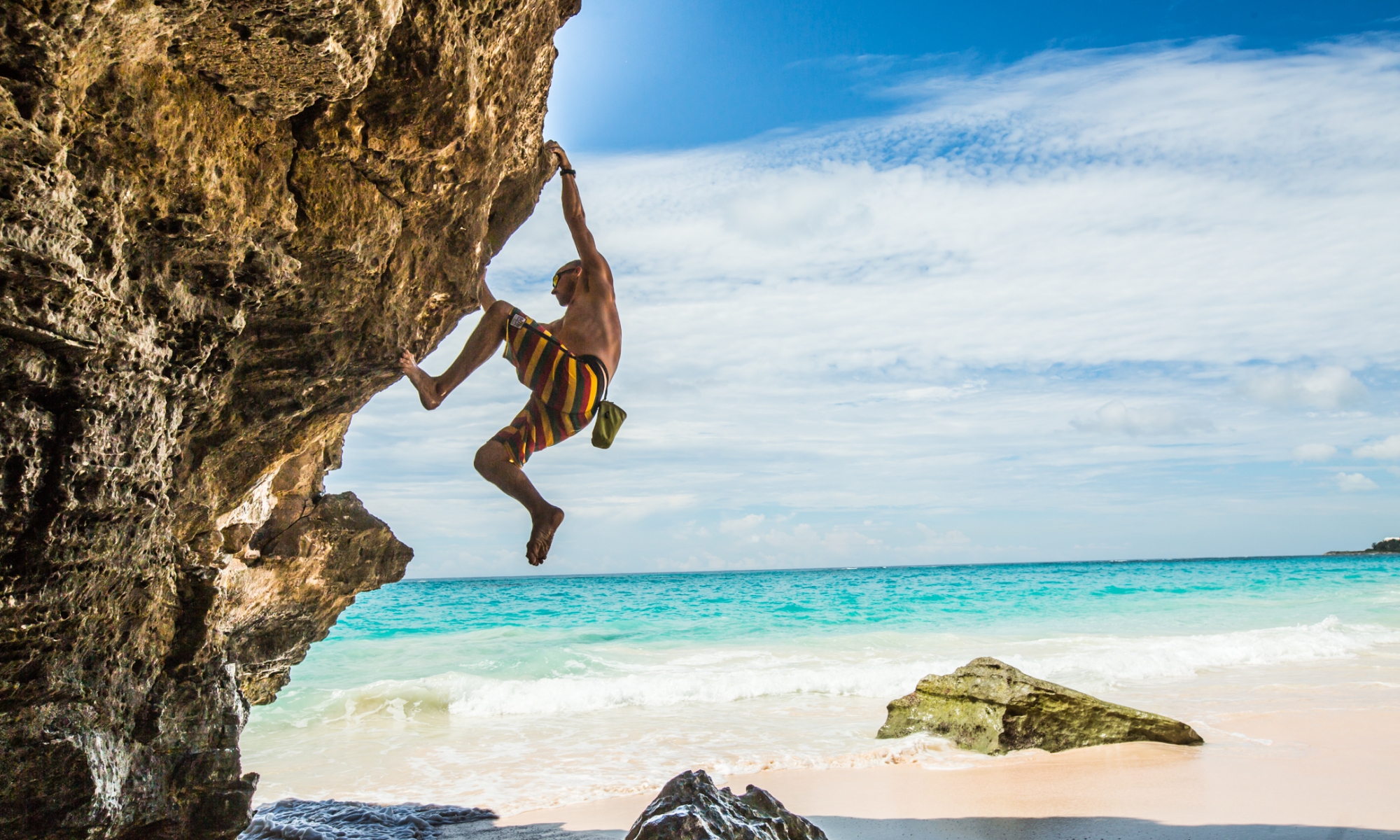 There are many bouldering opportunities down the beach from Tuckers Point  beach club in Tucker’s Town. The rock is excellent quality here and the area is a strong contender for having the best bouldering in Bermuda. Unfortunately, the beach is private. No right of access is implied by the route descriptions. Head for what’s left of the arches and then walk west down to the end of the beach. The sand level varies massively. The problems are described from east to west. Unless otherwise indicated.

Jazmyne Watson on All Property is Theft. Photo Andrew Burr.

Called to the Bar Area

CALLED TO THE BAR V0

The little wall half way down the beach is only a viable venue when the sand level is very low. Start in the little cave feature left of centre. Traverse right to the base of the overhanging arete and climb this. Grant Farquhar Nov 2002.

The overhanging arête facing back up the beach. Start on the right hand side of the arete below some obvious monos. Use crimps and smears to latch better holds on the arête. Climb this to jugs. The grade depends on the level of the sand. When the sand is very low an ankle snapping iceberg boulder emerges so watch out for it in case it is only just covered. Grant Farquhar, 7/Oct/06. Second ascent Davie Crawford, 7/Feb/09.

The scoop on the left side of the arete. Low sand levels make this route excellent, quite highball and spicy! Well worthwhile, on superb rock. A classic at its grade! time lapse video here. Grant Farquhar & Davie Crawford 7/Feb/09.

The first of a trilogy of slightly sandy crack lines left of Ad Hominem. All three are much better at low sand level. Davie Crawford 20/Feb/09.

The adjacent crack line left of Sandpiper. Sandpiper and Piedpiper are interchangeable and finish at the same point. Davie Crawford 20/Feb/09.

The next one left. The shortest of the three and probably the best.
time lapse video here of FA

The right hand problem on the amazing orange wall. Start left of the right arete below a large crozzly pocket. Climb steeply to gain the pocket. Flowstone pinches and a diagonal break lead to the finishing jugs. Scramble down and right to descend. Grant Farquhar 29/April/09.

Jazmyne Watson on All Property is Theft. Photo Andrew Burr.

The central line provides good sustained powerful climbing. Start up the leftwards slanting diagonal crack for a few moves then pull out right to climb the central hanging arete to a sloping finish. Scramble down and right to descend. Beware the large boulder underneath. Grant Farquhar 13/5/09.

This excellent boulder problem follows a natural, ascending (right to left) slash line across the lower part of the Trespasser’s Cove wall. Start right of centre and set off left from the obvious crack line. A handful of strenuous moves along a rail of jugs lead to a niche. Leave the niche and follow the shelf of sloping hand holds above to a definite crux at the highest point of the traverse. Don’t relax yet – there’s more to come! Continue via cruel, fingery holds to the finishing ledge of the Straight Up the Cracks routes. Downclimb. Davie Crawford 6/April/09.

Davie Crawford at the crux on the FA of Trespasser’s Traverse. Photo Julie Crawford.

The venue for this battle is the low level traverse of the entire wall. The outcome is down to you. You will either be dangling like spidey or resembling sandman. Start on a no-hands resting ledge on the right arete where you can clean your shoes. Step down and left and follow the traverse line into the starting holds of Trespasser’s Traverse. Continue leftwards below this to a rest in a cave. The next section is the crux and gives absorbing climbing on edges and pockets with some crucial heelhooks. When you get to the cracks, finish up the right hand one. Grant Farquhar 29/4/09.

STRAIGHT UP THE CRACKS V1 4m

Twin overhanging cracks are found to the left hand side of Trespasser’s Cove. Both offer similar styles of crack climbing (unusual for Bermuda) and yield to some laybacking. Continue to a ledge above, then downclimb or jump onto deep sand. These are better at low sand level. Davie Crawford 6/April/09.

Charlotte Best on Straight Up The Cracks. Photo Davie Crawford.

AAARR! This ere beach be a short hop west of Trespasser’s Cove and can be accessed from there at low tide or via yar scurvy vessel.

The obvious arete on the large boulder. Fantastic rock.

The wall left of the arete. A bouldery pressgang gains the flake line.

Further down the beach to the west is a cave with potential for sports climbing. There is at least one good line through the apex, although the rock is the usual south shore softness and would need the longer bolts.